A designer well known in Paris as we experienced this past September.   Tae Ashida is a sought after brand in the likes of famous and popular names.

Born in Kishiwada City, Osaka, Koshino received the first prize of the design competition sponsored by the Nippon Designers Club while studying at the Bunka Fashion College, Tokyo. In 1964, she opened the first haute couture store in Shinsaibashi, a prime location in Osaka, and since 1977 she has presented her collection in Tokyo until now. Her sensational debut in Europe was in 1978, when she participated in the Alta Moda in Rome as the first Japanese designer. For 10 years from 1982, she was engaged in the Paris Pret-a-Porter Collection, and ever since then has been invited to present collections in many cities around the world, as well as collaborating events with artists from other fields. She went back to the Paris Pret-a-Porter Collection in 2009, and with her experiences of exhibiting her art works during recent years, in 2011 she had the exhibition of both fashion works and art works in Paris. Koshino won the Mainichi Fashion Grand Prix in 1997, and the Osaka Art Awards 2001.
Brand Profile

You have been placed in a different world. The next thing you know, the fog beneath your feet starts to dissipate and from the trees in the background a shadow appears slowly making its way into the runway. The silhouette appears with fawn ears and continues making its way out of the shadow into the light. 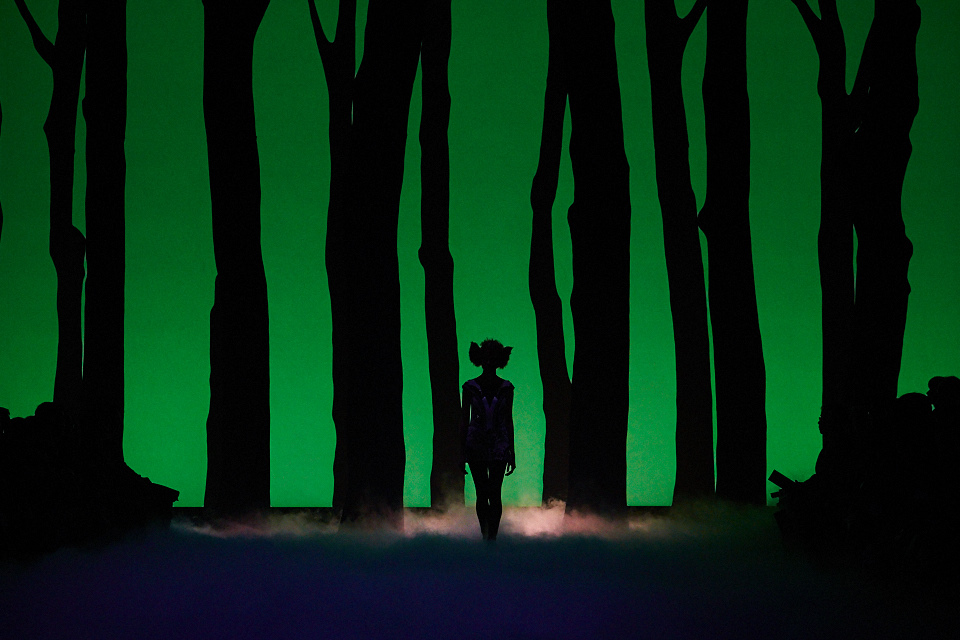 From the enchanted forest, mystical creatures appear. The pointy ears and slender silhouette walks slowly as if floating through the mist. Eyes that follow you as a predator in the night become the owl. This was the introduction of the collection the first piece was an embellished shirt with encrusted stones and sequins made the outline of the owl face protruding and gave it a three dimensional look. 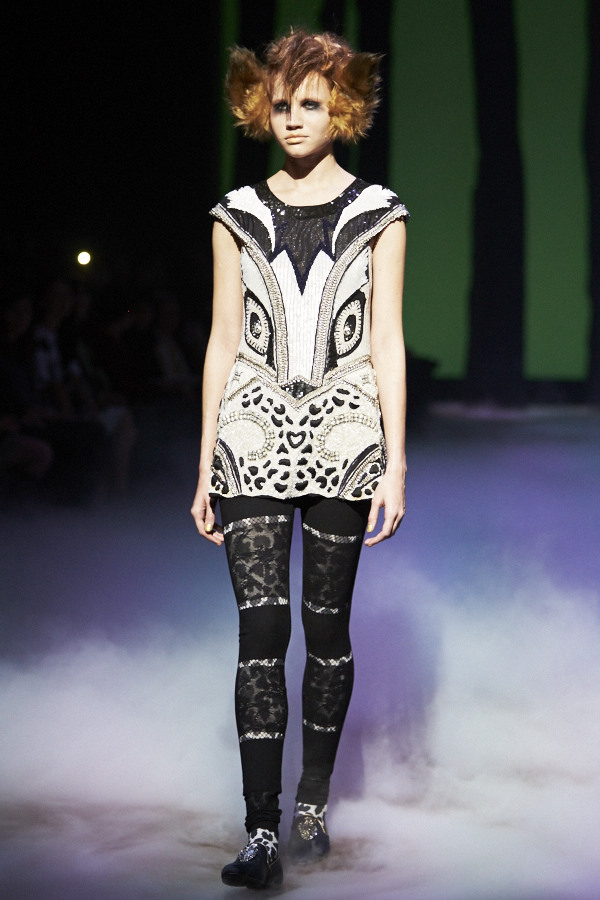 The collection was a sure dazzle but not a disappointing one, the dresses flowed gracefully with an opulence look to them on the models.

Peacock like, the model walked down with this dress in prints of lime green, turquoise, ocean blue and salmon.

Like a queen of the forest, the mystical creature transforms itself into a nature deity in charge of the forces of nature and in tune with the animal kingdom. Mother goddess, mother nature.

A Turquoise cape with embroidery

Another futuristic ensemble front zipper closure below the knee dress in black tone as the canvas for the gold and grey embroidery work.

A la Red Ridding hood-Like inspired on the children’s book, the hooded cape in tones of Red and Maroon made its appearance during the collection. With blue as an accent color we could observe the furry details in the hood as a resemblance of a fox or wolf.

Next, we see an oversized lapel coat flowing to the knee, with distinctive turquoise edging and elk embroidery. 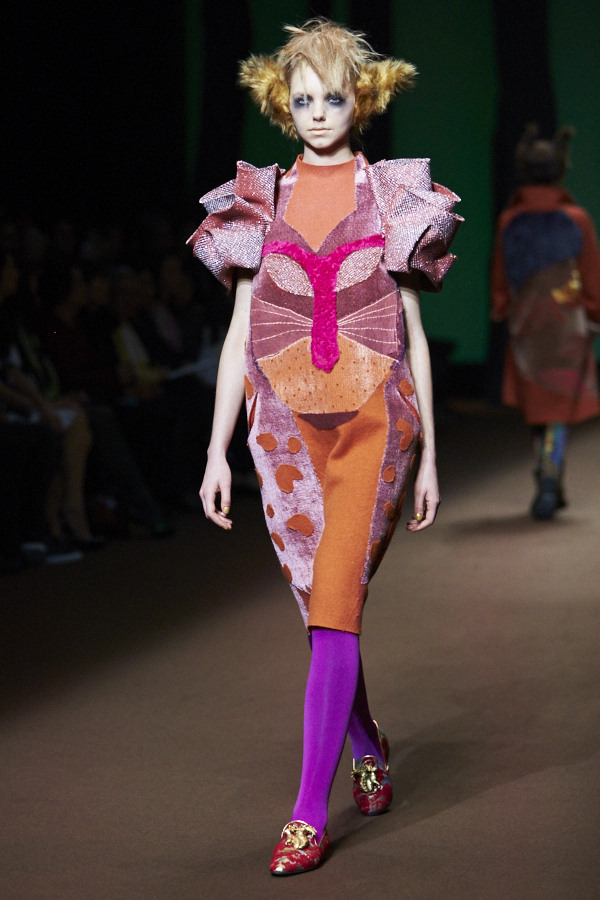 As a Lioness the model walks the runway with ferociousness and intensity in her eyes.

A pink and violet dress with orange used as a splash of color.  A ferocious combination

A doe, Shades of Pink and magenta make this coat a perfect accessory for Autum/Winter blues.

Green and Purple dream with a sand tone highlighting the ensembles make a perfect harmony in the forest. Asymmetrical cut top allows the arms free, paired down with a above the knee black skirt. 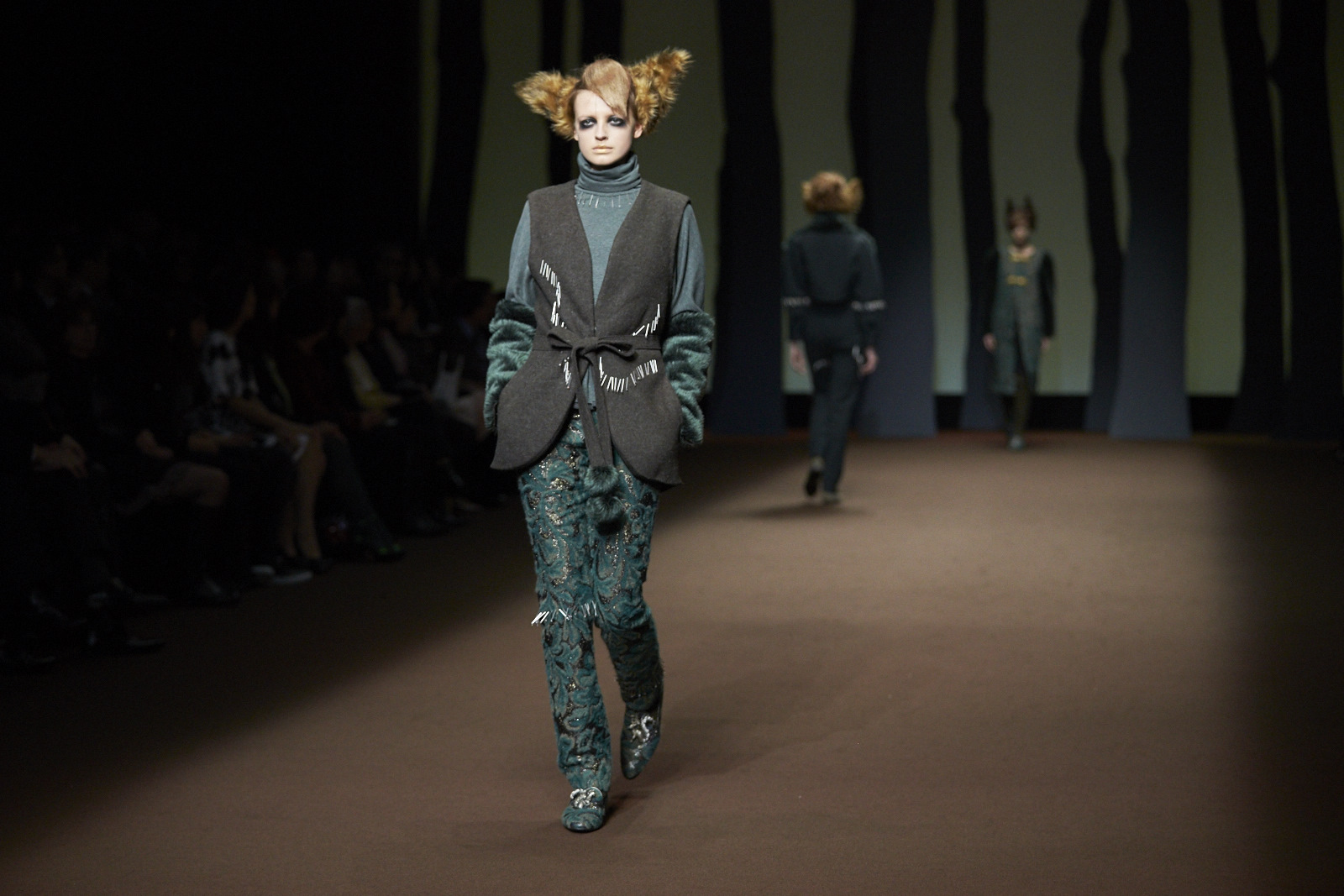 A punk alternative edgy touch was available in this collection. Perhaps, not your cup of tea but one has to admire the variety of the textiles and elements used. The safety pins were a nice touch to bring the overall aesthetic of the line.

A series of forest prints in a black and yellow canvas.  A very complete and cohesive collection with pleanty of choices for us for Autumn /Winter season.